Walking into the familiar study, the words drip effortlessly as my head dipped down in the darkness.

“Your wishes are my law,” a few steps, never looking up. “and yet, I fain would prove to you how near unto my heart…” I look up, catching his eye beneath my ebony hair. “the honour of our house must ever be.”

I stop before his desk.  He never looks up and the candle flickers from the new intrusion.

“I knew you were here.” He dipped the nib of his pen in the ink to emphasize his words. “I could smell you.” That pretentious hatred was always present in his tone.

“Lies,” I countered sternly. I splayed my fingers across the front of his desk. “You heard my car, my music.” I stood straight then, looking down at him as he worked. “The music you disdain, but not so much as my vehicle.  And perhaps neither of which as much as I.”

He stood in the blink of an eye and slammed his hand down hard upon the desk, trapping the pen. I held my pain as he nearly broke it, smearing black ink across the page, his palm.

I never flinched, I never backed down as he finally righted his gaze.  His eyes were an echo to my own blue monstrosity.  I knew that look.  I was born to into those eyes.  And I wore them well.

“Well,” he said politely, swerving around the desk elegantly. “Aren’t we being dramatic tonight.” He snarled and in a flash, was upon me.  With unholy force his strong hand held fast, wrapping his lily white digits around my neck, smearing my equally white skin with ink. 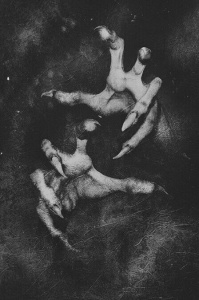 I huffed at the force of the grip and held his wrist and he pulled me just high enough to make my escape difficult.  My eyes never left his.  I was determined.

“What makes you think you can come crawling back to me whenever it pleases you?” His voice snaked around my jawline as his head dipped down toward my neck.  My emboldened retort was never voiced.  His bite found its purchase, hard and deep within my collarbone.  It was a cruel place to feast.  One that would leave me sore for days, perhaps weeks from such an ancient hunger.

Is this what you want? His voice screamed within my skull.  Frantically I gripped his wrist tighter, pushing at his shoulder with the other as he dug his fangs into my flesh.

I cried aloud, although not from pain.  Sheer frustration gripped me and I growled, kicked and roared my displeasure.  My desperation.

Valerius pulled away, the lower half of his face marred with my blood.  I was panting, eager.  Angry.

“So full of life,” he reared his head back and sighed before lulling it back to match my wide eyes.  “yet so foul, so …” it was odd to have him be at such a loss for words.  The hunger was getting the best of us both.

“You know what I want.” I snarled.

“You desire it as well.” My demeanor softened then.  I could not help it. “It disgusts me.”

Valerius pulled my arm aside, outward.  His other hand wrapped around my neck, tightening.  Strangling.  My breath became soft and shallow.

“You and I, we do not abide by the frail and meaningless moral codes of pathetic mortals.” He brought my arm toward his face, closer. Closer.  “You know this.”

I wanted to contest his logic, burn down his self-righteousness.  Yet again, before I could file my retort, pain slid into my core, blinding me to any reason.  His fangs found hard purchase in the crook of my arm, in the most tender and vulnerable of places.  He struck the vein true and the world quickly began to vanish.

Visions swirled around me as I came to, slumped against the wall and on the floor.  How I had moved so far, I held no recollection.  Stirring, my body broken and my soul crying for salvation (who was I kidding, whispering for damnation).  The plea was quite at first, then quickly rolled into a deep a desperate roar.

Valerius stood before me, looking down in confusion.  It was a mask, as always.  A ploy.  A game.  My mind whirled to a visage, almost forgotten within my memory but for only a split second before Valerius’ boot brought back the pain.

“Your little toy is not here,” he began.

“I know,” I answered with an unexpected resurgence of strength.

“He cannot save you,” Val said and I met his eyes and I stood slowly. His grin faltered slightly and it was my turn to smirk.

“I do not seek to be saved.” My eyes felt heavy, looking up through the mess of my midnight hair. “I seek corruption.” The words hung there in within the darkness and I tilted my head, my eyes lost in the darkness, waiting for him.  Biding my time.

In the distant corner, hidden within the darkness I saw a fleeting image. A solitary figure spying on us from afar.